The basic groundwork of logical functions. Comparing values, evaluating truthfulness of statements and doing different things based on those results.

The reason that == is true and === is false is because of “type coercion”. Because 5 is a number and “5” is a string, they have an equal value but not an equal type. With == Javascript uses type coercion to realize that even though they have a different type they have an identical value and therefore are the same at this level of specificity.

This gets a bit tricky when comparing null and undefined. For example if we have:

NaN is Not A Number

Logical Operators (AND, OR, NOT)

The easiest way to evaluate whether something is truthy or falsy is to evaluate it by turning it into the simplest possible Boolean Logic statement. An easy way to do that is to just negate it with ! 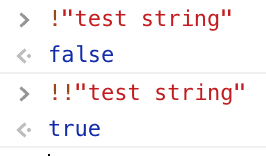 In this example a simple string of text would be true. In the first evaluation we are saying that it’s not true that “test string” is true, which is false. By using the double !! we can simply flip it into a more readable format to see if the statement is falsy or truthy.

There is not a solid logic behind whether these things are falsy or truthy, this is just a quirk of the language and it is different in different languages. 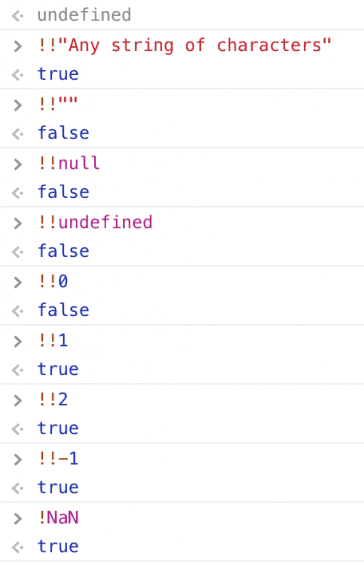 Some interesting things to note:

If, Else If, Else

And then when the variable age is changed the output in the console will change to reflect the new status.

Additionally, if we wanted to figure out if the persons age was odd or even, we can use the Modulo (%) mathematical operator. We simply divide any number by two with modulo and the answer will either be equal to zero or it will not. If the answer is equal to zero the number is even. If it is not then the number is odd. All even numbers are perfectly divisible by two without any remainder. We can use this as a simple check if a number is even or odd.

As you can see we used a similar concept to check whether the age is a square root, with one of Javascripts built in math functions.

As a final example here is a simple guessing game:

As a quick note, inputs that are entered with the prompt command are counted as strings, even if you are inputing numbers. So when we are checking if the guess is equal to secretNumber we would want to use == instead of ===.

If you want to check the datatype of a variable you can just check it with a built in function typeof, and then the name of the variable

and in the console we try it out…