Places where simple Javascript can be written and tested live

Addition, subtraction and division can all be completed in the console with minimal syntax:

Four plus 10 will return 14 in a console just like a calculator. Same with subtraction and division. The console will follow the standard order of operations for equations.

There is also another operator called modulo which gives the remainder

It will put the second number into the first number as many times as possible and then return the remainder.

Strings can use double quotes or single quotes, but they have to match.

If you need to use characters inside of a string that would normally cause an error, such as double quotations, you can escape those characters with a \ backslash as shown here:

What if the special character that we want is a backslash?

We make a double backslash of course:

Strings have a property that will give us the length of the string in characters (including spaces):

We can also ask for a specific character in a string:

remember that arrays in Javascript start at 0

If you notice in the example above e is actually the 11th character? What happened. Arrays in Javascript start at 0!

The best way to think of variables is as containers that store values. It is just a little box with a name on it that has certain values and properties. The name is very important because you will be referencing it later, so the name should be simple and accurately describe the contents of the box (variable).

Variables can store the 5 primitive datatypes that we talked about earlier: Numbers, Strings, Booleans, Null & Undefined. Variables can then be combined in functions to do interesting things.

I can reference these variables later!

and lastly I can update the value of a variable as time goes on: 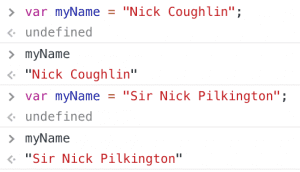 Both of these essentially mean “nothingness”, but there is a critical difference between the two.

Undefined is something that has been declared but its value has not been defined yet.

Null is something that simply does not exist. For example if I declare a variable but have not assigned a value to it, the variable is undefined. If I reference a variable that has never been declared, it is null.