An array is a type of basic data structure that lets us store and access information like numbers, strings, or even other arrays. Unlike objects, the order of items in an array matters. Without arrays we could define a set of strings as variables like this:

but a better way to store and access these variables would be in an array.

REMEMBER: Arrays are indexed starting at 0. So the above array would be indexed as so:

Referencing Items in the Array

The basic structure to reference items in the array is this. If I wanted to reference leopard from the above array i would do this:

You simply add the [ ] brackets to the end of the table name and then input the index of the item you would like to call. Roll tide.

Modify Items in the Array

We can add items to the array in the exact same way. To add a 5th cat to the table we can simply reference the 4th index (which does not currently exist) and pass it a string!

To find out how many items are in an array use the .length property:

*note: this will return the total number of items, not the final index number which would be 1 less.

adds an item automatically to the end of the array without having to figure out what the last index is and count it manually.

would go ahead and add panther to the end of the array at index 5.

this will automatically delete the last item in the array.

cats.pop(); //removes the panther that we just added at index 5

Very similar to .push, except .unshift will add an item to the front of the array.

and .shift will remove an item from the front.

Storing Items in a Variable

One very common thing to do when you are removing items from an array is to store them in another variable. For example: 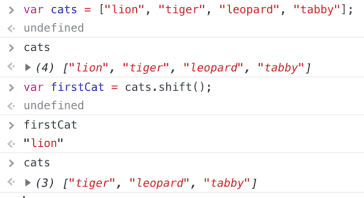 So as you can see here we made an array of cats and the first cat is the lion. Then we created a variable called firstCat and set that equal to the first item of the array which we have essentially pulled out of the cats array and set to its own variable.

This is a VERY important property. It allows us to search an array for specific string and then returns the position of that string in the array. If there are duplicated in the array it will return the first instance of that string. So if we take the following array:

and we want to locate the position of “leopard” we would input:

which we can then set into its own variable:

NOTE If an item is not present in an array, .indexOf() will return -1

Using this we can do a quick check if an item is in an array.

Slice copies a section of an array which you define with a quick range. For example if we have our cats array

and we want to copy the middle 3 cats to a new array, lets call it favoriteCats we would do the following:

So index 1 starts the slice at tiger, and then index 4 ends the slice at hobbes. Note that the ending index is not included in the slice that is taken, it stops just before then.

Note that slice did not remove those three cats from the array, it just copied them and added them to a new one.

Very similar to .slice except .splice will actually REMOVE an item from the array. The first argument is the index of the item to be removed and the second is the number of items to be removed.

You can actually nest arrays inside of arrays. So for example if we take

what if we wanted to select spotify? Spotify is in the 3rd array, which is index 2, and it is in index 1 of that array, so we would select it with: 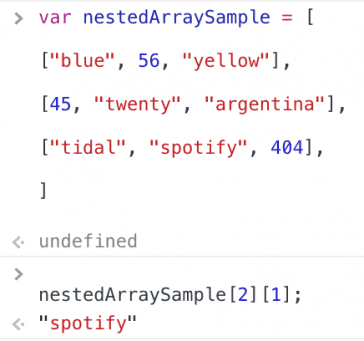 A practical example of an array iteration would be a list of comments to be displayed on a post. The comments are stored in an array and you want to loop over all of them to display them on a page!

This is accomplished by combining loops with arrays! Here we will discuss for loops and forEach loops.

To start, one of the most basic pieces of information that we have to understand about an array if we want to display every item is the length of the display. Which is accomplished with the .length property.

For looping all items in an array

If we want to console.log() all of the items in an array we could do the following: 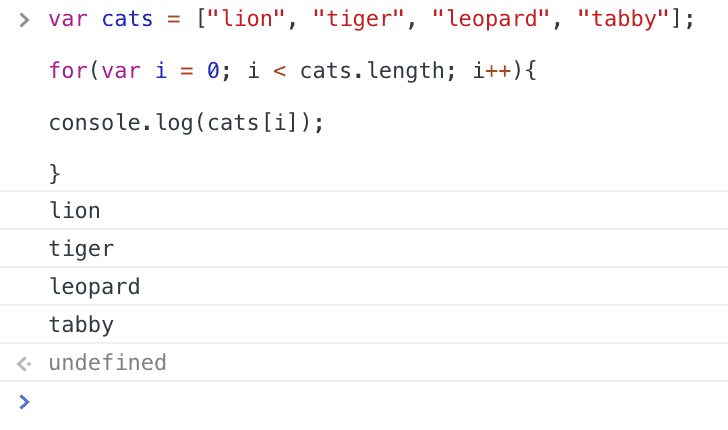 A new (as of 2009) and better way to list items in an array is the .foreach() method. Which is designed to do just this task. The big difference here is that this method takes a function as its argument. So the basic format is this:

and the someFunction takes an argument which essentially acts as a placeholder just for the sake of this function, that it uses as it loops through the array. For example:

We have an array called cats

**** THE KEY HERE is that the cat variable is a placeholder value that could be ANYTHING. We are just putting it here so that we can call it in //the code wherever we want!

** Syntax Notes: This must be .forEach, if you do not capitalize the E it will not run

Another thing to understand about the .foreach method is that it can take three argument, the first one we have gone over here, but the second and third we have not. The second is the index of the current item, and the third is the name of the index. MDN notes on this are available HERE.