Covering the basics of the Node.js Javascript engine.

Node.js is a Javascript runtime environment that allows you to execute Javascript outside of a browser, on a server. To enter the node console inside of your server terminal simply type node

ctrl+c (twice) or type .exit will take you back to the terminal

In Node, defining a function inside of a file does not make it globally available to the Node console. For example let us write the following function echo

This is a simple function that takes two arguments, a string and a number. It will print the string num number of times to the console. We save this function into a file called echo.js 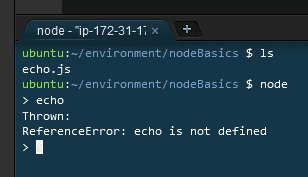 If we list the directory we can see that our file is visible. Then we enter the node console and ask for the definition of echo. echo is not defined.

The trick here is that the function must be executed in the file, and then we run the file. Let us add the following to our echo.js file

So now we have defined the function and executed it twice with different inputs on the arguments. To execute these functions we must tell node to run this file. To do this we return to the terminal and call node and point it at the file 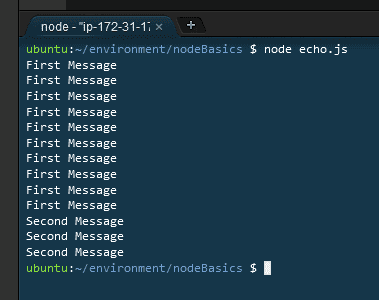 and Node has successfully run all of the functions in the file.

Before we go all crazy installing packages with npm, we need to lay a little bit of ground-work. There are two things you need to do:

The folder that holds your node packages is always titled node_modules

This is the name that npm looks for. If you don’t have a folder named node_modules in the root directory of your application you may thrown an error.

To launch the package.json creation utility use the following command:

After you follow the utility instructions it will automatically generate the package.json file. Here is an example of the file that will be created:

To install packages with NPM in the console type

and then to include the package in your application use

The full list of available modifiers on npm install is available here: npm-install